Zerene Stacker can be launched, controlled, and terminated from another program, with no interaction needed between Zerene Stacker and a human user.

In general, this is accomplished by having the other program do the following steps:

Details of these steps depend on the operating system and the programming environment of the calling program. A sample calling program for Microsoft Windows, written in Java, can be downloaded as described below.

The facility described here is current as of Zerene Stacker Version 1.02 Build T2021-05-28-1930. It is intended for use only by advanced users and software developers.

Batch scripts are XML files that tell Zerene Stacker what to do. The easy way to generate a batch script is to use Batch > Show Batch Dialog… to specify the operations to be performed, then use Batch > Save Batch Script… to write the batch script as an XML file. If your program needs to provide adjustable parameters such as directory names, then it is far easier to have it use an existing batch script as a template, than to construct a script from scratch.

A sample batch script and the corresponding Batch Dialog are shown below.

There are two ways to provide a batch script:

A copy of Sun’s JRE is included as files in the Zerene Stacker installation tree. The necessary command line is long and complicated. Fortunately, you don’t have to generate it from scratch. Whenever Zerene Stacker is launched from Window’s Start menu, macOS Launchpad, or some other icon, a copy of the corresponding launch command is written into a file named ZereneStacker\zerenstk.launchcmd in that user’s %appdata% folder. What your launcher program should do is read that file, append whatever few arguments are needed for your situation, and use the result.

For reference, a typical launch command on Windows looks like this (broken across multiple lines for clarity):

Parameters on this command line have the following meanings:

A sample launch-and-wait program written in Java can be downloaded from http://www.zerenesystems.com/stacker/docs/api/SampleLaunchProgram.java.

Here is a sample batch script that works well for simple stacking tasks. Notice that the output image naming template has been set to produce output files with simple predictable names, so that output files can be easily identified and read back by the calling program. This setting is done via Options > Preferences > Image Saving. 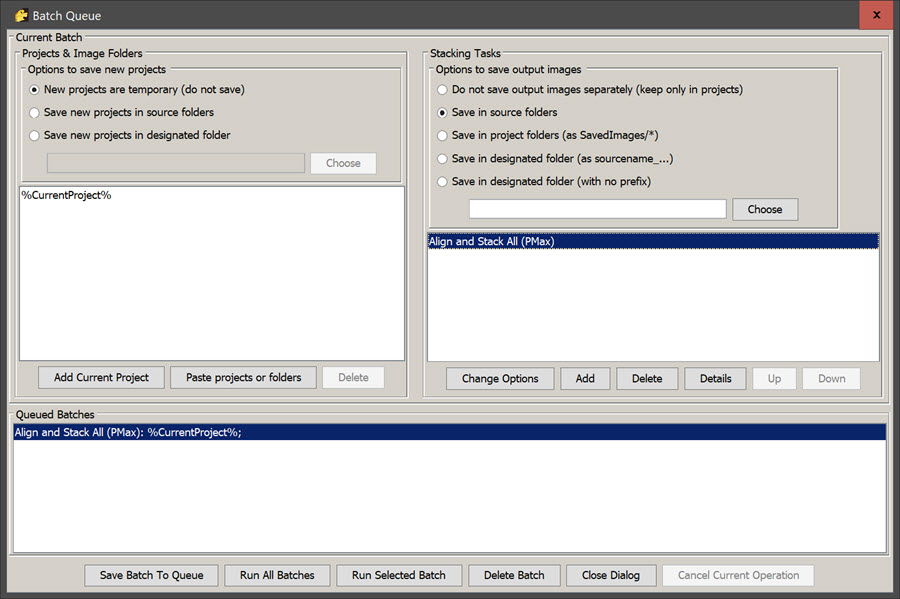 As shown, the disposition of output images is set to “Save in source folders”. This is good for most routine processing, since it naturally keeps outputs associated with inputs. This strategy does have one drawback: it requires removing output images if the folder must be reprocessed. If you anticipate needing to reprocess folders, then probably it is better to specify outputs as “Save in designated folder”. In this case, the name of the source directory will be automatically added to the front of output image names.

For reference, here are all of the currently defined command line options:

If image files or directories are specified on the command line, then a new project will be immediately opened and those images loaded into it.

If you are using ImageJ (http://rsbweb.nih.gov/ij/), then Zerene Stacker can be launched directly from an ImageJ macro using the built-in “exec” command. The arguments are long and arcane, and must be adjusted to reflect both the Zerene Stacker installation and the username of the current user.

On a typical 32-bit Windows XP system, the invocation looks like this (broken across multiple lines for clarity):

This is for a Zerene Stacker that is installed in Program Files and is currently being used by “username”.

This command probably looks like complete gibberish. The trick to understanding it is to take it apart a bit at a time.

Everything up through the com.zerenesystems.stacker.gui.MainFrame was obtained by reading the file %appdata%\ZereneStacker\zerenstk.launchcmd (after successfully launching Zerene Stacker from the Start > All Programs menu), then sticking an extra backslash in front of every existing backslash and quote-mark.

That is, what appears in zerenstk.launchcmd as

becomes in the exec command

That leading portion of the exec command simply executes a copy of the Java runtime system, passing to it a bunch of parameters needed to make it load and execute Zerene Stacker. When you run Zerene Stacker from its regular icons, this is just what zerenstk.exe does behind the scenes.

The added parameters are

which specify program options, and

which specifies a directory containing images and a ZereneBatch.xml file to process them.

Zerene Stacker can be executed as a command line application from shell programs such as bash. The exact arguments depend on the type of operating system and where Zerene Stacker is installed.

Using Cygwin on the same 32-bit Windows XP system described above for ImageJ, the proper invocation is this (broken across multiple lines for clarity):

Note the use of “java.exe” instead of “javaw.exe”. This is required on Windows systems in order to produce console output that can be logged or examined. If javaw.exe is used, then the application runs silently.