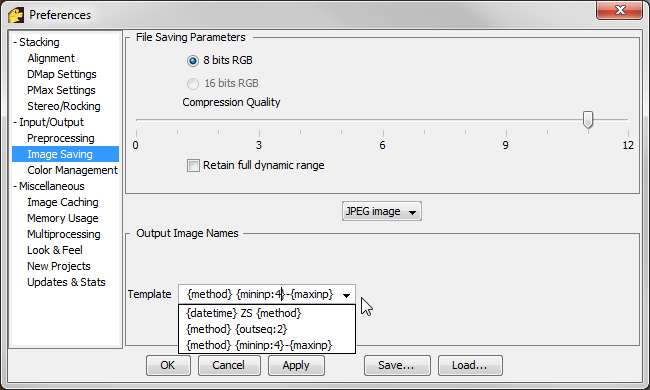 The top section, titled File Saving Parameters, controls the format of files when they are saved via File > Save Output Image(s).

The bottom section, titled Output Image Names, provides a template that controls how Zerene Stacker names output images as they are created and placed into the Output Images list.

By default, the output naming template is set to “{datetime} ZS {method}”, which produces names like “2011-04-23-15.37.40 ZS PMax”. However, you can redefine the template to use any combination of certain {tagnames} surrounded by curly braces, as follows.

Note: To work properly, the tagnames must be surrounded by curly braces {} and not by ordinary parentheses (). These characters look very much alike in certain fonts, so be sure to type carefully.

If the generated name is not unique, then a dash and a number will be appended to force uniqueness.