Is it better to use a focus rail or the ring on my lens?

The short answer is that it’s usually better to use the ring.

But this is a surprisingly complex question. There are a lot of factors to consider and the decision is not always clear-cut. There may even be some other options you haven’t considered.

The following table may give you some idea of how messy the question is:

Clearly no one method of focusing is always the best approach.

Well, at the heart of the problem there are three issues:

In some situations, the choice is clear.  If you’re shooting a landscape, then turn the focus ring — it’s the natural thing to do and it’s simple and effective.

In other cases, the choice doesn’t matter much — a raisin blown up to full frame will come out fine using almost any method.

But in some common cases, the choice matters a lot.  When you’re shooting something the size of a flower or maybe even a bouquet of flowers, you may be tempted to use that focus rail because it’s so convenient.  However, you can get far better results by turning the lens ring instead.

This is because stepping focus by adjusting your lens will greatly reduce changes in perspective that can cause problems when focusing by rail.

Let us illustrate by example.

Here’s the situation: we have a single flower in front of a textured background. 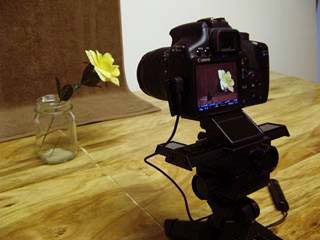 We’d like to capture the flower and all its leaves in sharp focus, while leaving the background as blurred as possible.  To blur the background, we open the lens full wide, f/4.5 in this case.  At f/4.5, it turns out that the lens provides only about 0.5 cm DOF, but there are 9 cm of depth between the foreground petal and the farthest leaf. So, we need around 20 focus steps.

We can cover 9 cm in two different ways: by moving the camera on a focus rail, or by turning the focus ring on the lens.

Here are the results from those alternatives, as stacked by the PMax method. 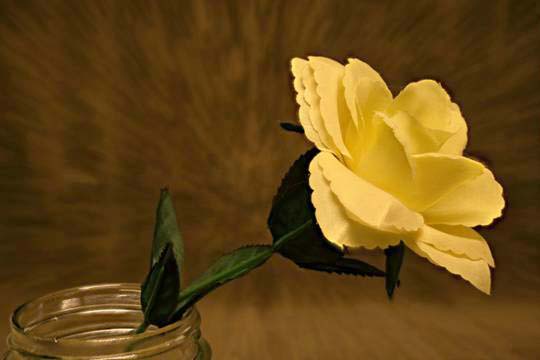 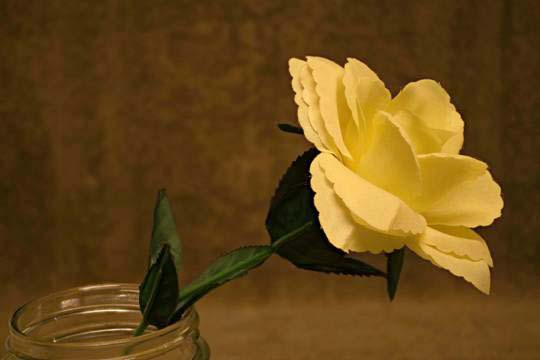 At the above scale, the major difference is the radial streaking “zoomburst” pattern in the background that appears in the by-rail stack even though it certainly wasn’t present in the real subject.

When we look closer, other artifacts appear.

For example here is the top of the jar, first by rail: 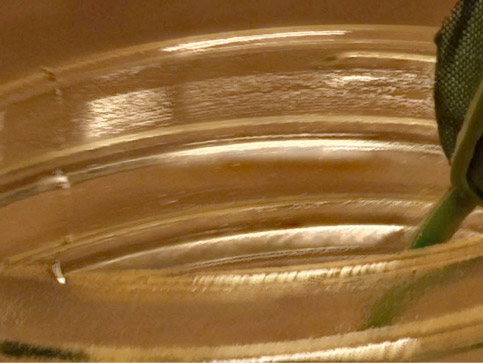 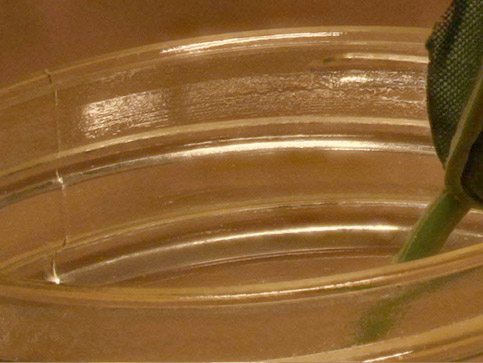 And here is the edge of the flower, 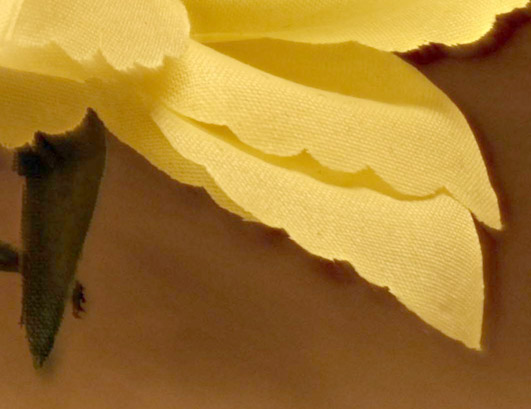 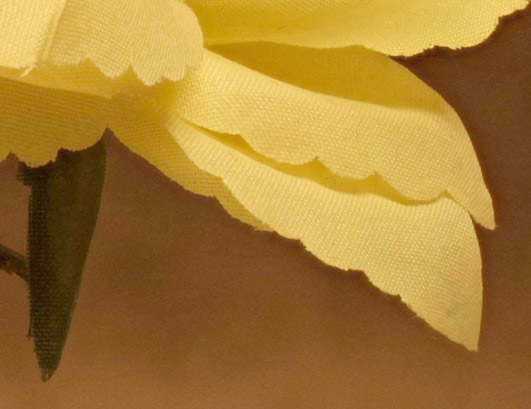 It should be clear in each case that the focus-by-ring stack gives a much better result than focus-by-rail. The by-rail result has big halos and looks smeared; the by-ring result has only some small halos.

When we move the camera on a focus rail, the situation looks like this: 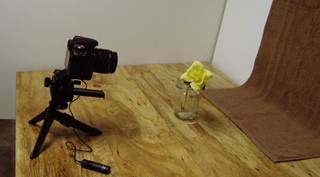 and focused on foreground petal 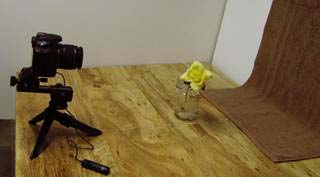 Because of the different positions of the lens, the camera sees the world very differently at each end of the stack.

Most obviously, the subject has different scales: 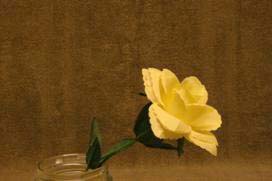 and rail positioned to focus on background leaf, 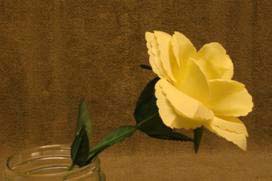 If scale were the only issue, Zerene Stacker could compensate for it.

But more importantly the subject also appears to have different shapes.

This is easily seen in the following animation, which shows the two views overlaid on each other and aligned as well as possible:

Notice that both the flower and top of the jar appear to tip.

Of course they’re not really tipping; it’s just that the different position of the camera lens causes them to look different.

The effect is the same, however: the subject appears to move and Zerene Stacker cannot compensate for this.  Apparent movement of the subject due to camera movement causes artifacts in the stacked result just like real movement of the subject would.  The DMap method handles this better than the PMax method shown above for illustration, but really it's best to reduce or avoid movement in the first place if possible.

Summary: keep your lens in one place as much as possible.  For larger subjects, focus by ring, not by rail.

By the way, there's nothing that says you have to turn the focus ring by hand (“manual”). Many lenses come equipped with motors that are usually used for automatic focus (“AF motor”), but those motors can also be controlled by software running in a computer or tablet that is tethered to the camera. Many modern cameras even have a feature called “focus bracketing” (or something similar) that can shoot by-ring focus stacks automatically, entirely controlled by the camera rather than by an attached device. If your camera is one of those, then we strongly recommend learning to use that feature.

For use with cameras that do not provide a built-in focus bracketing capability, tutorials on some software packages that can help (ControlMyNikon, Canon EOS Utility, Nikon Camera Control Pro 2) can be found on our Zerene Stacker Tutorials page. Other newer applications include qDslrDashboard and DSLR Controller. If you're particularly interested in going wireless to a tablet or smartphone, then CamRanger makes a very slick integrated package.

All of these tools can greatly simplify the task of shooting high quality focus stacks “by ring”, especially using modern AF lenses that often have focus rings that are painfully sensitive to turn by hand.

We hope this helps! Please write to support@zerenesystems.com if you need further assistance with this or any other aspect of focus stacking.